Pakistan wanted to have a dollar each way on Osama bin Ladin - and he died there... 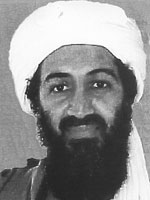 Pakistan wanted to have a dollar each way on Osama bin Ladin - and he died there...


Pakistan's president said on Tuesday accusations that his nation extends safe haven to extremists were "baseless" and insisted its long-term help was crucial to the US triumph in gunning down Osama bin Laden.

Asif Ali Zardari's defence came after Washington warned it would probe how the al-Qaeda kingpin managed to live in undetected luxury in Pakistan, as gripping new details emerged about the US commando raid that killed him.

Officials said DNA tests had proven conclusively that the man shot dead by US special forces in Abbottabad was indeed the Islamist terror mastermind who boasted about the deaths of 3,000 people in the September 11 attacks of 2001.

Bin Laden's killing by helicopter-borne US Navy SEAL commandos was the climax of years of painstaking intelligence work, picking up the trail from the mountains of Afghanistan to a palatial villa in a Pakistani garrison town.

Senior US officials were on Tuesday holding delicate discussions on whether to prove Osama bin Laden's death to the world by releasing a photo of his corpse.

President Barack Obama's security team was debating whether to release photographic evidence and weighing the possible impact of such a move, an official said on condition of anonymity.

Obama will be aware that the publication of a picture of a dead bin Laden would lay to rest any conspiracy theories in the wider world that Washington somehow faked his killing.

But officials will also be conscious of the potential of stirring a backlash, possibly against US missions abroad, or other targets, in the Muslim world from any picture deemed disrespectful to the dead or disfigured.

Obama's top anti-terror adviser John Brennan said it was "inconceivable" that bin Laden did not enjoy a support network in Pakistan, a nuclear-armed nation allied uneasily to the US-led war in neighbouring Afghanistan.

After Sunday night's public celebrations in New York and Washington, the mood among some US lawmakers turned angry amid demands to know how bin Laden lived unmolested in a country that receives billions of dollars of US aid.

Leafy Abbottabad, home to the Pakistani equivalent of the West Point and Sandhurst military academies, is popular with retired military personnel and tourists alike, and lies just two hours' drive north of Islamabad.

But in an opinion piece written for Tuesday's Washington Post, the Pakistani president said the criticism was groundless.

"Some in the US press have suggested that Pakistan lacked vitality in its pursuit of terrorism, or worse yet that we were disingenuous and actually protected the terrorists we claimed to be pursuing," Zardari said.

"Such baseless speculation may make exciting cable news but it doesn't reflect fact."

Zardari acknowledged that the US commandos carried out the Abbottabad raid without Pakistani collaboration - but stressed that Islamabad had initially helped to identify the al-Qaeda courier who led them to bin Laden.

Overall, he wrote, "a decade of cooperation and partnership between the United States and Pakistan led up to the elimination of Osama bin Laden as a continuing threat to the civilised world".

In an interview with AFP, Pakistani Prime Minister Yousuf Raza Gilani sidestepped questions over how bin Laden had gone undetected.

Referring to the late terrorism mastermind as "that gentleman", Gilani said only that the villa housing bin Laden was in a "remote area" out of reach of the army's main city bases.

But leaders in both Afghanistan and India have said bin Laden's discovery so close to Islamabad vindicated their claims of double-dealing by Pakistan's military and intelligence powerbrokers.

And French Foreign Minister Alain Juppe -- who was due to meet Gilani in Paris later on Tuesday -- said the fact that bin Laden went completely unnoticed showed that Pakistan's position on the late al-Qaeda leader "lacks clarity".

The commando operation, which US officials said lasted less than 40 minutes, stormed a heavily fortified $US1 million compound that stood out from other properties for its towering perimeter walls and heavy security.

But in a country where anti-US feeling runs strong and where conspiracy theories proliferate, not everyone was buying the US version of events.

"Nobody believes it. We've never seen any Arabs around here," said Bashir Qureshi, 61, who lives a stone's throw from where bin Laden was shot and whose windows were blown out in the raid.

"They (the US) said they had thrown his body to the sea! This is wrong, he was not here."

US officials said bin Laden was buried at sea after Islamic rites on the USS Carl Vinson aircraft carrier, as many world leaders welcomed his demise but warned it did not mean the challenge from terror was over.

Next to the bullet-riddled villa in Abbottabad, military track marks could be seen in the adjoining maize and vegetable fields, and children were looting scattered fragments of metal and plastic.

"I am going to sell it," said 13-year-old Imran, claiming to be carrying part of one US helicopter that crashed and was blown up by its crew during the operation.

With Pakistan's main Taliban faction vowing vengeance, the United States said on Tuesday it was closing its consulates in the cities of Lahore and Peshawar to the public until further notice.

The US State Department warned of the potential for reprisals against Americans, while CIA chief Leon Panetta said terrorist groups "almost certainly" would try to avenge bin Laden.

After months of top-secret planning, the operation came down to a simple command delivered by US President Barack Obama on Friday -- "it's a go."

"We got him," Obama told his top lieutenants, who had gathered in the White House Situation Room to watch the dramatic operation unfold late on Sunday, according to US press accounts.

The high tension gripping the room had finally been broken by confirmation relayed by Panetta that the status of bin Laden -- codenamed "Geronimo" -- was now "EKIA": Enemy Killed in Action.

Of five people killed in the raid, Geronimo was identified as the tall, bearded nemesis of successive US administrations who inspired generations of jihadist fighters to take up arms first against the Soviets and then the West.

But at no point in the planning and execution of the raid was Pakistan entrusted with the explosive information.

Brennan said the United States did not notify Islamabad of the raid until its Black Hawk and Chinook helicopters safely exited Pakistani airspace with bin Laden's remains.

Hundreds late on Monday took to the streets in Quetta, a city believed to be home to the Afghan Taliban's ruling council, in Pakistan's first rally to honour bin Laden, burning a US flag and chanting anti-US slogans.

But by early evening Tuesday, there had been no further major protests in Pakistan.