Was Chris Carter right - Phil Goff is not the right man to lead Labour... 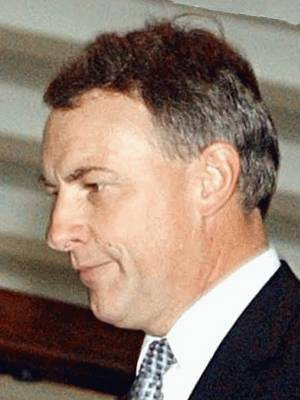 Image via Wikipedia
One has to really feel for Labour MP Chris Carter. What a stupid thing he did writing eo rgw mwsia in a self addressed envelope which revealed his identity.

Now about the comments he made about Labour leader, Phil Goff. Was Chris right about Goff's ability as leader and an alternative prime minister to lead New Zealand? At this stage I would have to agree with Chris Carter, Phil Goff is not the right man - but who else? David Cunliffe? With some leadership experience I would say yes.

David told me on Facebook that Labour's leadership was all decided and supported by the caucus through to the next election. Mmmmm! But things and times change!

We know what National intends to do after the elections, sort of. There will be some form of privatisation of state assets or government departments. Some PPP's, most likely in education.

What we need is a leader who will come out and state that all privatisation will be reversed; only compensation will be at original cost! The old fashioned re-nationalisation! If Key and his cronies know this, they will be very careful setting up PPP's and other privatisation programs.

So we will finish the way we started - was Chris Carter right about Phil Goff not being the right man to lead Labour? And I would have to agree with him at this stage.

Posted by Unknown at 5:35 PM No comments:

John key should ask Helen Clark for advice because he is stuffing up ENZED... 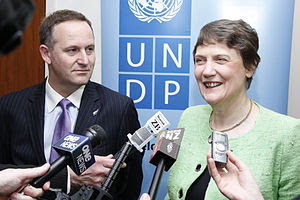 Image via Wikipedia
A story from Hutts Blogesphere:


John Key wants to jump into bed with the Chinese and introduce alien policies here...

Image via WikipediaIs the John Key led National government a fascist administration? Why are they attacking mostly young Kiwi workers with their 90 day trials for new workers and now demanding a doctor's note for the first day off work sick. I understand this is the way things have been done in the US; but the US is hardly a leader in social and workplace policies, are they? Yet New Zealand's rightwing pollies rush there to learn how to kick workers in the guts.

NZ once led the world in social policies and was a world leader in labour relations too. Now it is like a little snot-nosed kid in the world of adults. John key and his rusty lock excuse for an administration will probably be introducing Chinese policies into New Zealand. This dimwit politician want's Kiwis to learn Mandarin. Why would we? There may well be some benefit for those dealing direct with China, but for the majority there is no need - the Chinese can learn English properly if they want to deal with us.

John Key wants to jump into bed with the Chinese and introduce alien policies. Is he looking for a job after poiltics? Helen Clark got a job at the United Nations - is ranked number three there! John Key is not fit to clean Ms Clark's shoes!


He should ask Helen Clark for advice because he is stuffing up ENZED!

David Bain not guilty, not innnocent - no compo


Joe Karam angry about Bain doco  - not guilty, not innocent -  no compo...

Mr Bain was found not guilty last year of murdering his father Robin, his mother Margaret and his siblings Stephen, Laniet and Arawa in Dunedin in 1994. His defence team argued that Robin killed the family before turning the gun on himself because he was having an incestuous affair with his daughter Laniet and feared it would be exposed.

Bryan Bruce's documentary which screened last night, questioned some of the testimony given by witnesses for the defence case at the murder trial in 1995 and the retrial in 2009.

In its attempt to argue that Robin was involved in an incestuous relationship, the defence team drew on evidence from Daryl Young who told the retrial he had sold Robin a photocopier for the principal's school in 1993. Mr Young said he came across Robin at a camping ground and believed he had been arguing with a woman. He said Robin was wrapped in a towel and smelt of alcohol. However, Mr Bruce produced a sales document which had the signature of Robin and a different sales person, Ian Arthur, who confirmed he had sold the photocopier to Mr Bain. He said it is possible Mr Young accompanied him when the document was signed but he did not recall any occasion when he saw the principal half undressed.

Other issues covered on the programme included the lack of Robin Bain's fingerprints on the gun used to shoot his family.

Mr Karam says TVNZ refused to listen to supporters' plea to postpone the documentary while they sought compensation for David Bain.

"They promote this thing and get this vast audience with the claim that one phone call to us could have put to bed completely and would have meant they couldn't make this outrageous, untrue claim that they'd found new evidence which busted the case wide open."

The documentary had an audience of 626,000 viewer


Actually David. Bain was found not guilty, not innocent.