John Key given a poisonous chalice for change... 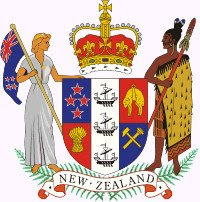 As far as the economic problems are concerned, the tsunami hasn't reached NZ shores yet!

The new National Government has some strange new bedfellows when considering Rodney Hide and his economic misfits and political clowns; Peter Dunne, the done deal; and the politically expedient Maori Party leaders, Pita and Turiana - a majority of their party votes were cast for Labour. Those chickens will be coming home to roost in three years, and what will happen to the Maori Party when they do? Indeed!

The new Labour leadership of Phil Goff and Annette King may actually get a greater boost and opportunity for their brand of change at the next elections.

Too late for the New Zealand people; Helen Clark will have ridden off into the sunset by then, and Michael Cullen will want to spend more time with his grandchildren; and Jim Anderton will have taken his long overdue and earned National Super!
Posted by Unknown at 5:18 PM 1 comment:

There will be a National - led government - and why Labour lost..

There will be a National-led government supported by the ultra-right Act Party led by Rodney Hide, and also Peter Dunne.

This is at the expense of one of New Zealand's greatest ever prime minister's, Helen Clark, who has stepped down as Labour leader, along with deputy Michael Cullen. It is an end of an era for the New Zealand people. We will not see the like of it for a couple of generations or more, if ever!

Winston Peters and his New Zealand First Party are also casualties of this election which has swung to the right, not the centre as new prime minister, John Key claims. He may well be a centrist but we all know that just behind him are those rightwing ratbags from the 1990's who made life a misery for the average Kiwi. The Act lineup includes the creator of Rogernomics himself, Roger Douglas. He may well be knighted and have a Sir in front of his name - but I will never address this traitor of the NZ people who nearly destroyed the social structure in this country. Some people committed suicide because of the economic and social conditions which followed the tragic policies of Douglas and his cronies.

We realise we will have this bunch of rightwing cronies for up to at least six years. If National gets in the position of getting re-elected in three years the ensuing policies will be different from chalk and cheese to what Key claims his government will deliver now and in the future.

It will take at least six years to have a new Labour leader blooded and experienced enough to take on Key and deliver a victory - and I predict it won't be Phil Goff who may become the interim leader of the Labour Party.

And in six years i will be enjoying my National Superannuation and won't be writing any more political blogs, and will be leaving the worries to younger people.

Are the polls true - or will there be a left coalition...

Are the polls true - or will there be a left coalition? Will Helen Clark and Labour squeak in with the Greens and the Maori Party? Will Winston and NZ First get that 5% to survive?

Of course there will be change, but do you really want Roger Douglas back in government? You'll get him if Act does well! He is No 3 on their list.

I can tell you the "real" people don't want a bar of National and Act. We want real leadership, jobs and security, which National can't deliver!


I don't think John Key would survive his term before Bill English rolls him, in any case.

Tomorrow is tomorrow and...
Posted by Unknown at 1:41 PM No comments:

KIWI RIVERMAN
Posted by Unknown at 6:07 PM No comments:

A fanatic National landslide or a left of centre coalition...

There will be a maniacal National landslide that would prove New Zealanders don't deserve the vote, or a left of centre coalition.

It is too difficult to predict what people will do inside their voting booth.

Lets face it Nationaal has a head, but no body; it represents nobody at present just political expediency. Who is John Key and who does he represent? Who are those shadowy figures behind him?

What does a multi-millionaire former money making financial speculator want in politics? Are the rumours correct about Key? He is in it to achieve power for powers sake! And he accuses Helen Clark and Micheal Cullen of never having a "real" job; financial speculation is a real job? Yeah right!

Is he the deceitful stooge front man who is attempting to assist National into power, because Bill English can't and Don Brash couldn't? Rumour has it if he is successful he will resign as prime minister a year or so before the next election, and as a consequence all bets will be off because any election agreement made by John Key will not bind his successor, Bill English. Remember you were told here, readers!
Posted by Unknown at 4:44 PM No comments: