A red faced and highly embarrassed NZ police force after the High Court decision into the now invalid Dotcom police raid results. Should never take the FBI or an other foreign police force evidence at face value. Who knows, Dotcom may have grounds to sue the NZ police for millions - ultimately the NZ Government and taxpayers. Has such a similar thing happened before? In the Ureweras perhaps?

Kiwirail being prepared for privatisation... 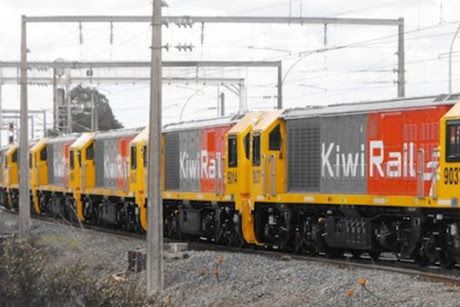 KiwiRail is to be restructured

KiwiRail is to be restructured with its land holdings shifted to another entity, resulting in a write-down of some $6.7 billion.
It has gained Government approval to pour its rail and ferry operating assets into a new KiwiRail state-owned enterprise while crown land used for railways will be held by NZ Railways Corp.
This will result in the commercial arm of KiwiRail carrying assets of between $1.1 billion and $1.3 billion, down from about $7.8 billion currently, chairman John Spencer said in a statement.
The proposal was first flagged at the KiwiRail's annual meeting in November.
"This is a much more realistic valuation of the company's assets, which will greatly assist KiwiRail in meeting its commercial objectives and provide more discipline in driving improved performance," Mr Spencer said.
The changes mean the carrying value of KiwiRail's assets reflect "the revenue they generate".
Railways Corp has revaluation reserves of about $5 billion, "which would be written off first as a result of a writedown in the assets' value," KiwiRail said.
"Any writedown in excess of $5 billion would affect NZRC's bottom line."
The writedown in the value of KiwiRail's assets would be taken this financial year ending June 30, with the final amount to be determined after independent valuations.
The composition of the new boards of KiwiRail and NZRC haven't yet been decided though they are likely to include "a majority of common directors".
In February, KiwiRail said full-year earnings were expected to be in the range of $105 million to $115 million, though that was before any writedown.
NZN


Read more: http://www.3news.co.nz/67b-writedown-for-KiwiRail/tabid/421/articleID/259291/Default.aspx#ixzz1yyjmqllO
Posted by Unknown at 1:02 AM No comments:


Police fear for the safety of a mountain bike rider who was last seen riding in a regional park north of Wellington on Thursday.

Searchers have already scoured the area but failed to find any trace of Mr Kaiki who has not used his bank accounts or cell phone since he was last seen.

He is described as 170cm tall, of medium build and with dark coloured hair. He was wearing a green long-sleeved top, blue jeans, white sports shoes and carried a blue backpack.

Mr Kaiki was riding a blue Jamis mountain bike.
If you have seen Lance contact the Lower Hutt police. I don't have a photo of Lance at this stage.
Posted by Unknown at 12:48 AM No comments:

Collins v Little - a leadership battle in the House a few years down the track? 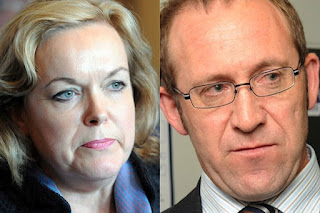 A leadership battle in the House a few years down the track? Collins v Little?

http://www.3news.co.nz/Crusher-Collins-vs-Andrew-Little-a-leadership-battle/tabid/1382/articleID/258547/Default.aspx
Posted by Unknown at 5:06 PM No comments:

National  is attempting  to justify and connect its partial privatisation programme of energy companies to the unfortunate experiment of the late 1980's and early 1990's. Labour paid a very heavy price for that politically foolish policy -  thousands of Labour supporters voted for alternative parties and helped to throw Labour out of office for nine years.

The same thing will happen to National at the next elections in 2014. I predict one of the biggest landslide defeats for National then - they'll be out of office for nineteen or more years. A weak-kneed John Key will quickly disappear from New Zealand politics in a vain attempt to protect his sullied   reputation and struggle for some overseas economic post. Smile and wave has been seen for what it really is  - pathetic posturing!


While on the subject of John Key, one has to question his credibility  when claiming  that New Zealanders are warming to the National Party government's privatisation policy, when a succession of polls and comments from many National Party members oppose the policy.

Many people criticise former PM Helen Clark, but she was a political heavyweight compared to this pompous pretender. 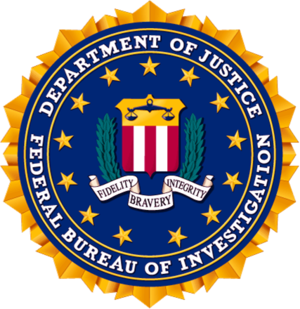 ealth Sector|Employment Figures |Tobacco|Election|Hot Topics Index|Tax|Alcohol Law|ACC Reform
Ethnic Affairs Minister Judith Collins should stop using her own department's website to promote the National Party and to solicit donations, says Labour's ethnic MPs Rajen Prasad and Raymond Huo.
"The Office of Ethnic Affairs website directs visitors to link through to Judith Collins' National Party website which contains a section where people can donate money and sign up to the Party," said Rajen Prasad.
"That is completely inappropriate. Judith Collins should keep her Party activities separate from her Ministerial responsibilities."
"The Minister has not maintained a particularly high profile at ethnic events and functions since taking on the job. She mostly leaves her Parliamentary Private Secretary Melissa Lee to deputise for her," said Raymond Huo.
"That's a real shame because ethnic communities are very keen to have a direct relationship with the Minister. Perhaps that's what Judith Collins should concentrate on rather than chasing up political donations through the Ethnic Affairs website."
The Labour MPs are asking the Minister to remove the link to the National Party from the Ethnic Affairs website immediately.
"The Minister is taking the ethnic community for granted as similar links do not appear in the websites of her other departments or Ministries as far we can tell," said Rajen Prasad.
"John Key says he has set a high standard for his Ministers. He should enforce them when it comes to Judith Collins," said Raymond Huo.
Find the link on the Ethnic Affairs website below:
http://www.ethnicaffairs.govt.nz/oeawebsite.nsf/wpg_url/About-Us-Who-We-Are-Our-Minister
Posted by Unknown at 4:15 PM No comments:

National warned it could end up in the political wilderness...

Opposition MPs last night warned their National counterparts they'll end up in the political wilderness after the next election by partially selling off the state owned energy companies.

Opposition MPs last night warned their National counterparts they'll end up in the political wilderness after the next election by partially selling off the state owned energy companies.

The second reading of the Mixed Ownership Model Bill has passed through Parliament narrowly, 61 votes to 59.

Mr Peters was one of those who got stuck in.

"Remember this at 7.30 next election night, those members will remember this debate because they will be gone."

But National's Nick Smith reminded Winston Peters of comments he made about asset sales in 1998:

"We are very pleased with the most successful public sale."

Mr Smith pointed out there were 14 Labour MPs who were in the Cabinet that sold 49 percent of Spring Energy Coal, but now use extravagant language like treachery for exactly the same policy.

"And that just shows Mr Speaker how shallow as a birdbath members are opposite."

Labour's Clayton Cosgrove hit back, describing it as a dark day in New Zealand.

"Some of us in this parliament Sir went down that track and when we were elected to government some years later, we learnt from our experience, we actually bought assets back, we knew that the experiment did not work."

He says the Mixed Ownership Model Bill is rushed, shonky legislation and hopes people will have their say through a referendum.

"And even if they get one away, the people of New Zealand have got an opportunity to stop the rest and the second and the third and any more, and then I say Sir, boot 'em out in 2014."

The Bill now goes to committee stage, where Labour's expected to propose hundreds of amendments in an attempt to delay its passage.

Acknowledgements: © 2012 NZCity, NewsTalkZB
Posted by Unknown at 4:10 PM No comments: 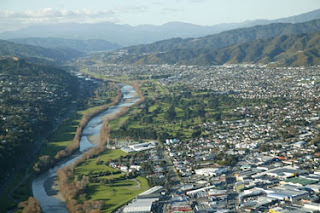 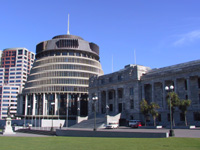 The controversial reform of local government is now under way with the introduction of the bill to parliament. The first reading was passed 61-59. As well as restraining councils from excessive spending - in whose opinion anyway - it is believed we will be back to 1989 and more compulsory amalgamation of local authorities.

It is also believed that the National Party favours more super cities in Hamilton, Wellington and Christchurch.

In recent years I have attempted to encourage debate about the amalgamation of Upper and Lower Hutt cities. But the petty parochialism of the two councils has prevented such a proposal from even being discussed. The mayors of the two cities do not support amalgamation, not publicly anyway. I saw the amalgamation of the Hutt Valley cities as a way to avoid a super city. But now it will come regardless. A decision will be made for us before next year's local body elections, at which I had hoped Hutt Valley residents would have been able to vote on a proposal to amalgamate the two Hutt Valley cities and create a district council.

The one good thing that will come out of the forced amalgamation will be the discontinuation of the term "Hutt City". There has never been such an entity in New Zealand anyway.

http://www.newstalkzb.co.nz/auckland/news/nbpol/1188607065-Proposals-for-local-government-reform
Posted by Unknown at 7:28 PM No comments:

Labour claims forced amalgamations are on the way...again

Forced council amalgamations on the way

Communities will lose their right to have a say on council amalgamations under National’s Local Government Amendment Bill, says Labour’s Acting Local Government spokesperson Phil Twyford.
“John Key is breaking his election promise (see link to news story below) that there would be no forced amalgamations,” Phil Twyford said. “This Bill opens the door to exactly that.”
“Once this law is passed people could well see their local council forcibly amalgamated into new super city style councils, and they won’t have a say in what happens.
“The law currently guarantees citizens the right to approve or reject in a binding ballot any proposal for reorganisation of their council. National is taking away that democratic right.
“If people want the chance to vote on an amalgamation they will have to get a petition signed by 10 per cent of the population.
“This is a confiscation of New Zealanders’ democratic rights.
“After the forced amalgamation of Auckland without a poll, and the sacking of elected members of Environment Canterbury, this is just the latest indicator of National’s contempt for local democracy,” Phil Twyford said.
National’s Local Government Act 2002 Amendment Bill also gives the Local Government Minister the power to suspend elections for up to a year while a reorganisation plan is implemented. Labour’s local government spokesperson Annette King has referred this section of the Bill to Parliament’s Regulation Review Committee to investigate whether it is appropriate to use regulation to make such a change to a statutory requirement.
Mr Twyford said Labour would be voting against the Bill at its first reading today. “It is an illogical, poorly conceived Bill that will achieve little other than undermining local government and taking rights away from communities.”
http://www.newstalkzb.co.nz/auckland/news/nbpol/1188607065-Proposals-for-local-government-reform

Kim Dotcom is fighting US government... FIGHTING: Kim Dotcom and his co-accused are taking on the US government...
The size of Kim Dotcom's Megaupload servers has made disclosing the evidence against him near impossible in the allotted time, New Zealand Crown lawyers have argued.
A District Court judge last week overruled the US Government and granted the internet millionaire the right to information gathered by the FBI in the copyright case against him.
The Crown has today argued against the order in the High Court at Auckland, saying it was "unrealistic" to do so in the 21 days allowed by the court.

Posted by Unknown at 5:56 PM No comments: