The so-called political left are more interested in philosophical matters than establishing an alternative to the present fascist National Government. They are more interested in furthering the political interests of David Cunliffe than cementing up the parliamentary Labour Party to work for and represent the working class and the poor in New Zealand. In their blogs they consistently and regularly try to undermine the leadership of David Shearer.  Shearer has been selected as leader through to the next general elections. Do you get that??

If he is successful he will be the next prime minister of a Labour/ Greens/Mana and perhaps NZ First as well, government. If he is unsuccessful his political career will be virtually over. There would be so much blood-letting that it would destroy the Labour Party as a viable political entity. Yes, and David Cunliffe may become the darling of the left -  a bitterly divided one that wouldn't be able to organise a barbeque  in a flea-market.

So that is really what is at stake - the future of New Zealand society.  Success of a Shearer-led coalition government would see the political right in the wilderness for a generation. I have a new philosophy if you like -  no prime minister should be allowed more than two consecutive terms in government. So in relation to the last democratic government in power here -  Helen Clark should have stood aside for Michael Cullen after two terms. Labour would have survived the 2008 election, and David Cunliffe may have become prime minister in 2011 after Mike Cullen had his two terms.

I'm an old fellow now and voted Labour from the Big Norm Kirk government in 1972 through to 1990 when I voted Jim Anderton's New Labour as a protest against the Free Marketeers spear-headed by  Mike Moore and Roger Douglas. Labour got its arse well and truly kicked by a smart politico in Farmer Jim Bolger!

As that anti-drink driving ad goes, "I've said my piece,who's next?

Today the house must not win - David Cunliffe...

Today the house must not win

by David Cunliffe
New Zealand is a small, remote country with an unfortunate reliance on imported capital to maintain our standard of living. A crucial insurance for the economy is New Zealanders’ hard-earned reputation for having the lowest level of government corruption in the world.
Or at least that’s something we had.
I write this post with the heaviest of hearts because I know how completely National has jeopardised the economy. I know how foreign investors will be frightened by the truth. Their reaction could see more hardworking and innocent Kiwis turfed on the unemployment scrapheap.
Ultimately, though, there is an overwhelming public interest in having on record just how low Prime Minister John Key and his factotum Steven Joyce have sunk in their bid to trade our country’s laws for a casino’s cash.
Yesterday the Deputy Auditor-General released her report into the tender process for the SkyCity convention centre. At 71 pages it is among of the longest and most damning auditor’s reports I have seen. John Armstrong, writing in the New Zealand Herald, assessed the tender as “verging on banana republic kind of stuff without the bananas.”Armstrong was too polite.
Labour leader David Shearer summed the report up more completely: “Kiwis know [Key] was donkey deep in this entire process. The deal with SkyCity was his idea. He knew exactly what was going on and was pulling the strings behind the scenes.”
I have followed the convention centre tender since it first came to public light in 2010 – months after John Key had a cozy dinner with the casino company’s board and (in the PM’s own words) “discussed a possible National Convention Centre and they raised issues relating to the Gambling Act 2003”.
As time has passed I have become more and more outraged by what was transparently a stacked process seemingly designed to ensure SkyCity was the only tenderer left standing at the end.
All throughout the National Government have obfuscated, played cat-and-mouse games with the Opposition and the media, and denied multiple Official Information Act requests on the most specious of grounds.
Not only did ministers refuse to answer more than 100 of my parliamentary questions on the SkyCity deal – but they even took to using the SkyCity deal as a supposed reason to refuse answering dozens of questions which were quite unrelated to the casino!
The Commerce Select Committee (which I am a member of) even had to take the most extraordinary step of recalling Ministry of Economic Development/MoBIE officials to a second testimony session, following their failure to answer legitimate questions as part of the committee’s 2011/12 financial review.
As the years passed and the stench of the rotten tender grew overpowering, the sole explanation Key and Joyce offered for their preference for SkyCity was that taxpayers wouldn’t foot the bill for the conference centre. But that was an outright lie – $2.1 million of your dollars were diverted from the Christchurch earthquake recovery effort and other economic development programmes to support the convention centre design!
Finally, when the Deputy Auditor-General prudently announced a probe into the whole sordid affair, Steven Joyce vowed to push on in contempt of her. In my time in Parliament I have never seen anything like it.
But now the auditor has published her report. Her findings are damning and they back up what I have been saying and what my Labour colleagues have been saying since 2010. It is beyond comprehension that Steven Joyce did not resign from the ministry immediately after receiving the report.
The Deputy Auditor-General’s findings include (and I quote):
So what are the broad consequences for New Zealand?
Has the opaque and unfair SkyCity deal been scrapped? No.
Instead National has thumbed its nose at the auditor’s office and is about to restart the negotiations. They have to finalise pesky details such as how anyone will receive the television news once a hulking great pokie palace is plonked where our state broadcaster has some of its studios.
Has the Government promised not to change the law to flood central Auckland with very low-taxed pokies, while taking money out of high-taxed pub pokies which fund kids’ learn to swim programmes and quit gambling programmes?
It’s a no to that too.
As my Labour colleague Ruth Dyson succinctly put it “The convention centre will not be ‘free’. The social cost for New Zealanders and their families battling problem gambling will be significant.”
So National seem quite happy to plough along with their trade in our laws, whatever the consequences. Well Labour will fight them every step of the way. I can only hope that the government’s support partners in the Māori and United Future parties will do the right thing and join us.
Ultimately, though, this is not only about one shady deal – although one shady deal is clearly one too many.
This speaks to the whole world about what sort of country New Zealand is in our collective soul. It speaks to the truth about whether we have a clean government which stands up and stops corruption wherever its finds it. Or whether we don’t.
And it speaks to our longstanding core values of egalitarianism and equality. Labour MPs face the human casualties of the National government’s economic mismanagement in our electorate offices every week. We know the despair felt by ordinary, honest kiwis who can plainly see that John Key’s ‘brighter future’ means one law for them and sweet deals for his mates at the big end of town.
The casino deal is a total disgrace. Clearly John Key and Steven Joyce don’t care.
So, in light of the Deputy Auditor-General’s report, I am publicly calling on SkyCity to formally withdraw their current tender. That should trigger the entire process to restart from the beginning, so it can be run fairly and transparently.
I look forward to SkyCity’s quick, positive and public response.
Posted by Unknown at 9:29 PM 2 comments:

New poll shows the beginning of the end for National...

Posted by Unknown at 2:36 PM No comments:

Parata should have been dumped from Cabinet - new poll... 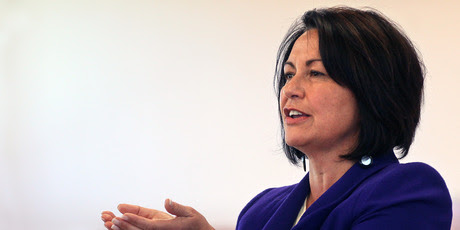 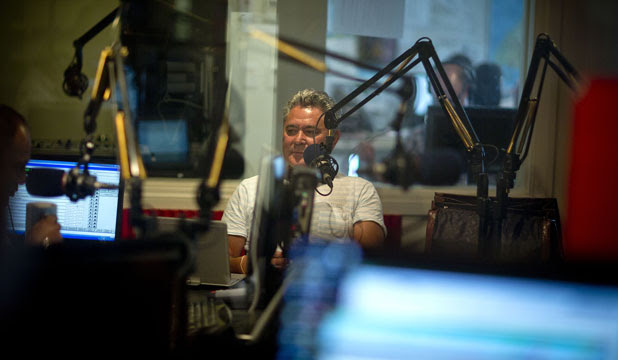 BEHIND THE MIC: As part of his Radio Live double-act with Willie Jackson, Tamihere is well known in the streets of South Auckland...
Everyone is pissing in everyone else's pocket," declares John Tamihere. "People even have to whisper at their own barbecues. That's what I think is wrong in this country - everyone talks in hushed tones."
Not that Tamihere shouts. His is a rather soft voice, punctuated by a girlish, Billy T James giggle, and a winning smile. But what he says has plenty of impact. It seems, sometimes, he rather wishes it didn't.
"Gareth Morgan says kill all the cats, how does a man get away with it? If I said it . . ." he trails off, pondering the thought. "What's wrong with pointing out my truth?"
It's nearly a decade since Tamihere somewhat sabotaged his own political career with his indiscretions (the Labour frontbums etc) to Ian Wishart; just a couple of months since his putative comeback was marked by calling National minister Paula Bennett a fat girl and TV3 reporter Tova O'Brien a silly little girl.
He resiles from neither criticism. "Do you want me to say she's morbidly obese? You don't say that. Do I have to be so dumbed down and talk in this grey language?"
Tamihere reckons it's not what he says, but how he says it that gets him into trouble. He reckons people know he's saying the right thing, "but they might be far more genteel or academic [how they say it]. I'm not".
And so, in the course of an hour, he casually insults Helen Clark, most of Labour's front bench, radio broadcaster Danny Watson, Bennett (again - still fat), TV3's Tova O'Brien (again - still silly), former Waitakere mayor Bob Harvey, Wishart (scumbag), the Act Party (also scumbags), the Maori Party (incompetent), the unions (lazy), academics (timid), me (loser), and himself....

A seismic change in public attitude - but tell that to the pollsters Frank...

Smile and wave has lost its public support. The New Zealand National Government is in such a hell of a mess its hard to really know what the public thinks? A seismic change indeed! Keep writing Frankie.

NZ is still someone else's country...

When will we take back our country? When will we demand that the opposition parties act in our interests, not just those ambitious for power. Let us tell NZ Labour and the NZ Greens this is their last chance to give us back our country. If they don't we will create a new party and take it back. We can't guarantee it to be peaceful.

A huge no to an extension of the parliamentary term to four years...

There is no way the people of New Zealand will support an extension of the parliamentary term to four years. Even the Aussies have not been stupid enough to go down that track. We don't have a second higher chamber to curb the excesses of the present three year termed governments of either hue anyway. MMP while promising, has not delivered the controls we expected. No way Jose. Three years is more than enough when you consider the actions of incompetent and irresponsible prime ministers and their cabinets. John Key's Government needs the support of 75% of parliament. David Shearer will be told in due course not to give it to him; not if he wants to become the next prime minister. You have just two years at the most John key; hope you have found another job - the World Bank, IMF etc.

Posted by Unknown at 5:34 PM No comments:

Hope you had a great Waitangi Day holiday...

A letter from the next prime minister of New Zealand, David Shearer MP.

Posted by Unknown at 1:23 AM No comments: