Has the Kiwi SAS been sneaked back into Afghanistan on a revenge mission??


Has the Kiwi SAS been sneaked back into Afghanistan on a revenge mission...

Posted by Unknown at 6:02 PM No comments:

No Right Turn on the overthrow of local democracy in Canterbury…
National’s tyranny
So, its out there in the open: National explicitly suspended Canterbury’s democracy because they feared voters would vote to protect the environment from rapacious farmers:


The Government suspended democracy and restricted legal action in Canterbury to protect an agriculture boom potentially worth more than $5 billion to the national economy, documents reveal. It feared the economic boom promised by Canterbury irrigation could be in jeopardy unless Environment Canterbury (ECan) was “stable, effective and efficient”, says a Government report on August 27.
[...]
A separate Government document, disclosed to The Press under the Official Information Act, says the protection of Canterbury’s economic contribution and its future growth were a “key consideration” for suspending democracy.
Irrigation New Zealand chief executive Andrew Curtis said irrigation and the environment would have been threatened if the commissioners’ terms had not been extended. The Canterbury Water Management Strategy has an end target of 850,000ha within the next 50 years.
[...]
A Government document, disclosed to The Press under the Official Information Act, reveals that this needs to be continued because there is a “strong risk” people could revert to appealing to the Environment Court.

In case its not clear enough: the cost of that irrigation boom is poisoning Canterbury’s rivers. Canterbury voters don’t want this; in the 2007 ECan elections they elected four councillors specifically on an anti-irrigation ticket, and this trend looked likely to continue. And that is why the government acted. Likewise, the persistence of the community in standing up for their environment and challenging dubious irrigation decisions was the reason National removed those rights.
Suppressing democracy and suspending the rule of law because you don’t like the outcome is the action of a tyrant. It is exactly what happened inAlgeria in 1991 and Burma in 1990 and what is likely to happen in Fiji in 2014. And if National is willing to do this to local government, what’s to stop them from wheeling out the same arguments to suspend Parliamentary elections to prevent “socialists” from wrecking their “economic recovery” (you know, the one with no jobs, but half million dollar bonuses to CEOs)?
National’s actions in Canterbury call their commitment to democracy into question. They can no longer be trusted to be responsible players in a democratic system. They must be voted out, and kept out of power until it is clear that they accept democracy.

Posted by Unknown at 2:34 AM No comments:

National has gained support in the latest political poll and so has its Maori Party coalition partner. But they are really going nowhere because the centre left has a majority. They could not gain office without NZ First; and Winston Peters has already said this is not a possibility.

National has gained support in the latest political poll and Labour has tumbled.
A Roy Morgan Research poll released on Friday shows National up two points to 43.5 per cent and coalition partner the Maori Party up two points to 3.5 per cent.
Labour is down 4.5 points to 29 per cent and the Greens are down 0.5 of a point to 13 per cent.
NZ First is up a point to 7.5 per cent.
There's little change in the ratings of other minor parties.
The economy remains the biggest issue for New Zealanders, according to Roy Morgan.

A Labour Greens future or a new socialist party in NZ... 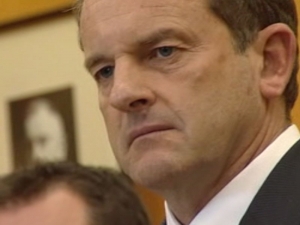 Does Mr David Shearer simply believe bloody immigrants are taking Kiwis jobs? Is that right or is it a lot more complicated than that.


Quote:  This means that any Labour Government led by Mr Shearer is likely to shy away from direct interventions in the labour market. It will not pass legislation designed to reverse the flow of wealth from wage and salary earners to owners and shareholders. It will not, by substantially lifting the minimum wage, engineer a wholesale winnowing-out of New Zealand’s most inefficient businesses. It will not pass legislation restoring universal union membership or the national award system. It will not use the Government’s ability to set wages and salaries in the public sector to provide both a guide and a goad for private sector employers. In short, it will not do any of the things required to raise the incomes of New Zealand’s wage and salary-earner.

I hope not because the NZ Labour Party would disappear in the future. It is a Labour/ Greens future or a new socialist party in NZ which would absorb the political left in this country.

http://bowalleyroad.blogspot.co.nz/2012/10/mr-shearers-selective-patriotism.html
Posted by Unknown at 9:06 PM No comments:

Expand
Michael Laws. Photo / APN
Controversial talkback host Michael Laws will leave RadioLive next year, with Sean Plunket set to take over Laws' nine-to-midday slot.
In a statement, Laws did not reveal what he was going to do after the final show on March 31, but said he would pursue "something new, something exciting and something that I've always wanted to do''.
The former Wanganui Mayor was part of the original RadioLive team which began broadcasting in 2005.
He has never been a stranger to controversy. Last year he told radio listeners he had "no idea'' why someone hadn't "taken a shotgun'' into the Herald on Sunday newspaper "and just cleaned out the entire newsroom''.
Earlier this month, the Broadcasting Standards Authority ordered RadioLive to apologise after Laws asked American Pit Bull Terrier Association spokeswoman Karen Batchelor to "wear a muzzle'', and accused her of making untrue statements, prompting her to complain to Radioworks.
RadioLive general manager Jana Rangooni thanked Laws for all he had done for the station.

I’ve been thinking about what you might call a ‘good problem’ for the Left.. but it leads me to a ‘problem problem’. OK, so let’s say we win the next election – as the Left must do and should do given how unpopular the Nats’ policies are and, for the last year, how inept their political management has been. How do you share the economic portfolios out?
With neither Shearer or Robertson having any economic pedigree, getting the economic team right is vital. And it also means the places are limited – Finance and Economic Development (now really a prize worth having after the creation of the MoBIE super-ministry) are the two economic portfolios worth a damn. Finance has long been as powerful as the Prime Ministership in many respects, and Joyce has grown Economic Development into something approaching their equal.
Now, Labour’s never going to sign over Finance to the Greens in a coalition deal – not unless they’re something very close to equal in size. So, if Labour’s line-up stays as is, Parker would take Finance. That leaves either Cunliffe or Norman to take MoBIE, and you would have to think that goes to Norman along with the Deputy Prime Ministership.