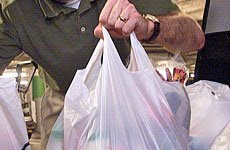 They claim to care about the environment but when the time comes to put their money where their cavernous mouths are, they shie away!

Well, they claimed the Labour -led government and their Greens supporters were creating a 'nanny-state' because of the eco-lightbulb fiasco, so we shouldn't really expect anything different from these rightwingers.

The Irish have levied retailers over the use of plastic shopping bags, and have raised millions for environmental projects. Would National follow siut? Yeah right!
Posted by Unknown at 8:40 PM 1 comment:

Employers have been exploiting workers in this fashion for ever...

CTU says employers hiring contractors to exploit loophole in law which allows less than minimum wage to be paid. They have been doing it for years and nine years of a Labour-led government didn't change it - do you really believe National will do anything about it? Yeah right!

The Council of Trade Unions claims employers are using contracting arrangements to get around paying the statutory minimum wage rates to people doing work such as leaflet delivery.

The CTU has contributed to the redrafting of a bill that will be debated in Parliament today aimed at closing the loophole.

Secretary Peter Conway says the downturn in the labour market has seen an increase in subcontracting work.

"The minimum wage is a really important protection and this loophole allows people to be employed as contractors and their piece rate does not add up to effectively the minimum wage. So we'd like to see that loophole closed."

Mr Conway says some businesses are evading the law concerning minimum wages by farming out low-skilled work to individual contractors who have little or no choice about work available to them.

Oh dear oh, dear! They are just a bunch of Tories and proving it. The first hundred days of the new government is over, and they are now looking like a one term government.

The 'nine day fornight;; the 'cycle track' from the Cape to the Bluff.

Labour oriented people are getting kicked off all the boards - they want Tories. Except Mike Cullen of course, but Mike is giving up politics anyway, so will be the exception. Why kick a person out just because of their politics? Jim Bolger, former Tory prime minister was actually head-hunted because they wanted a person of ability to run KiwiBank, and other boards.

Give them another year and their incompetence will be obvious. Its Labour in 2011, without Helen and Mike too! They say PhilGoff is just a "fill-in", we'll see!
Posted by Unknown at 6:54 PM No comments:

Is the nine day fortnight just a have...


Will it realy save jobs, create more? Is the nine day fornight just a have?

The nine-day working fortnight begins at the end of the month, but it is unclear how many businesses will adopt it.

The scheme, which involves the Government paying workers $12.50 for five hours in their tenth work day, starts on March 27 and is estimated to cost the country $20 million. It will apply to large companies at risk of having to make staff redundant. The workers will effectively have the day off and will not be required to undergo training as was previously mooted.

Business New Zealand says businesses are investigating how they can use the shorter fortnight to save jobs and businesses. Air New Zealand has indicated it may adopt the scheme.

But employment relations policy manager Paul Mackay says it is too early to say whether there will be a big uptake of the scheme. He says some employees have already taken the initiative, by opting for a four day week and the difference will be that they will now be subsidised by the Government for a lost day.

The ACC controversy is a National government red herring...

The ACC controversy is a National Government red herring. It is not our fault millions of dollars of investments were lost on the stock market!

National have wanted privatisation of the ACC for a decade or more. They have to look after their supporters by having a fire sale of the ACC, one way or another!

If they do not retain a universal no-fault scheme, we should have our rights to sue our employers or those responsible for our non-work accidents returned to us!
Posted by Unknown at 2:57 PM No comments: