Anti-worker 90 day probation law under attack before it even comes in force...

Anti-worker and anti-democratic law that doe nothing to promote jobs...


Even before it becomes law, the new 90-day probation period has sparked noisy protests.

A march is underway in central Auckland against the measure, which allows businesses with fewer than 20 staff to fire people in their first 90 days of employment. Unions are calling it the "fire at will law."

They plan to take their objections directly to the premises of employers making use of the law to sack people unfairly.

Another name for the law would be the 90 day Servants Act. Servants of their bosses!
Posted by Unknown at 4:20 PM No comments:

Thanks for the Labour memories, Helen, Michael and Jim...

With Helen Clark gone, and now Michael Cullen, the leadership of the Labour-led Government of nine years has gone. Jim Anderton is just a back bencher of a one man band. Phil Gough, new Labour leader, is facetiously described as just "filling in".

Times have changed; deteriorating economic conditions can do that to a government who defeated Don Brash three years ago when he thought victory was inevitable.

John Key,(who?)seems so unchallengeable, but National is in the same situation as Labour was for nine years - a two man band with a number of support crew!

But the difference is National won't and can't last for six years, let alone nine years, and maybe no more than three!

The economic tsunami will wash John Key away eventually, and maybe Bill the English Speaker may survive, and maybe he will get washed away just like Johnny Kash!

By then Labour's next generation will have been decided and blooded, but it will be a long time before they can produce anybody remotely of the stature or class of Helen Clark. New Zealand will be so much the poorer for her absence, but maybe the world will benefit in some other direction.

Thenk you Helen, and you too Michael and Jim. Thanks for those two good terms of government, especially the first when you led New Zealand back from the brink of social disaster and to economic sanity. Thanks for the memories. New Zealand will thank you three too in time to come. Bye for now!
Posted by Unknown at 3:56 PM No comments:

Boot camps the answer - or will we have fitter young criminals... 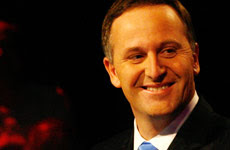 Boot Camps the 'holy grail' of National's social policies. The answer, or will we end up with a fitter young criminal class? The proof of the pudding they say, is in the eating!

He said the legislation, to go before Parliament on Wednesday, will send a strong message the behaviour of New Zealand's worst young criminals would not be tolerated.

The policy is a favourite of Mr Key, who raised it in his state of the nation speech a year ago, and the bill will get its first reading as part of National's 100-day plan.

It includes the Fresh Start programme - lasting 12 months, including up to three months in boot camp - and the doubling of youth court sentences.

It also extends the Youth Court's jurisdiction so it can deal with those aged 12 and 13 accused of serious offences.

Mr Key said that 40 of the country's worst offenders will take part in military style training programmes for three months.

"We need to deal more effectively with the growing group of young Kiwis who are seriously and repeatedly breaking the law. These ticking time bombs need to be sent a message that their behaviour will not be tolerated," Mr Key said.

Social Development Minister Paula Bennett has previously said some of the changes will not be available until next year, to allow time to set up the programmes, or have the space in residential centres to house those sentenced.

Other measures - including greater use by the Youth Court of orders for alcohol and drug rehabilitation, mentoring and parenting courses - would be available sooner as no law change was required.

The legislation is also expected to include "spotlight sentences" - where young offenders who do not comply with supervisory sentences are subject to monitoring with an ankle bracelet.

In his speech, Mr Key said spotlight sentences would be a court-ordered contract setting out the expectations on the offender such as curfews, an end to gang involvement, compliance with drug treatment programmes, or regular school attendance.

Mr Key said that to ensure compliance the court would "wield a big stick" - "intensive supervision and surveillance, including electronic monitoring of the young person using an ankle bracelet".

The Act Party's "three strikes and you're out" legislation will also go before Parliament this week.

Under the policy, criminals convicted of a serious offence for the third time will be sent to prison for a minimum of 25 years.

It is being introduced to Parliament by National as part of its support agreement with Act, although National has agreed to support it only to the select committee stage.


Act leader Rodney Hide said it was pleasing to see the policy make it in under National's 100-day plan.

Key the third politician to be insulted at Waitangi...

Oh dear me. Lightning not only strikes twice, but thrice! Key the third senior politician to be insulted, jostled or assaulted at Waitangi in recent years.

Look Waitangi is just not worth it or appropriate as our National Day. It is an important commemoration in our history, but should not and cannot be our national commemoration.

We need to look elsewhere and another day should be considered. New Zealand is no longer a bi-cultural dual partnership society - NZ is a multicultural society and our National Day should reflect this.

We need to consider our future as a society - what will happen after the current Queen Elizabeth the Second's death? What relevance will the British royality have for NZ? King Charles the Third? Yeah right!

Will we become a republic, with a new flag and national day? Perhaps!
Posted by Unknown at 9:19 PM No comments: