Companies increased profits and decreased numbers of jobs - does it really make sense? 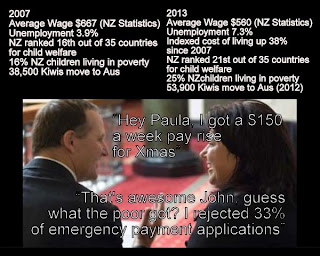 Posted by Unknown at 4:13 AM No comments:

Home › Politics
Contributor:
Fuseworks Me
Minister of Maori Affairs Dr Pita Sharples tonight paid tribute to his predecessor, Parekura Tureia Horomia, who passed away yesterday.
"Parekura was a great man in every sense of the word, and as a new Minister I had to fill some very big shoes," said Dr Sharples.
"He had been MP for Ikaroa Rawhiti since 1999, and was Minister of Maori Affairs from 2000 to 2008. In that time he had advanced a wide range of initiatives.
"Most notably he led the establishment of Maori Television, expanded the Waitangi Tribunal, and restructured the Maori Trust Office to meet contemporary needs. He lifted the funding for Maori Wardens, updated fisheries legislation and supported many Maori development projects."
"He also had Associate Ministerial roles in Education, Employment, State Services, Economic Development, Tourism, Fisheries and Forestry - all areas that were of huge importance to Maori at those times. His understanding of many of those areas also came from his experience in the public service, especially employment issues. Many Maori and community organisations secured funding from GELS and CEGS through Parekura’s support
"As a staunch advocate for education he initiated the Hui Taumata Matauranga where he brought together our great minds to explore educational issues; and he was also a champion for our wananga, whare kura and Maori education in general."
"His whanau, friends, and his electorate absolutely adored him. He has touched so many lives, in every corner of New Zealand. If there was a hui, you would often see Parekura there. No fuss, just there supporting the kaupapa - that was just his nature. He was a true gentleman, with not a bad bone in his body, nor a bad word for anyone."
"His dedication to his people was unwavering. He served his people tirelessly as MP for Ikaroa Rawhiti for 13 years and as Minister of Maori Affairs in the Labour Government for eight years, and we will miss him," said Dr Sharples.

a few seconds ago
The New Zealand Nats are legislating the offspring of the Employment Contracts Act - the ECA. The idea is to cut the 10 minute smoko breaks as we used to call them and the 30 minute lunch breaks. OSH came out a few years ago and said workers need these breaks. There has always been flexibilty where it has been needed, and afternoon breaks were often given away for a 30 minute earlier finishing time.

Actually I think National is just being bloody minded and stupid knowing it is going to the chopping block in 2014 - the idea will be to slow down Labour /Greens reform program. To make it easier Labour/Greens just needs to bring back pre-ECA legislation with a few modifications. To throw some hand grenades into the system - bring back compulsory unionism. It would solve so many problems in the workplace. Bring back the Awards system too. Make negotiations with employers so much easier too.

http://www.rotoruadailypost.co.nz/news/grey-power-slams-reheated-food-plan/1842273/
Posted by Unknown at 4:05 AM 2 comments:

Hutt Valley will not be forced by John key and his National Government to join with a Wellington City led amalagamation...

Who else has the GCSB spied on? 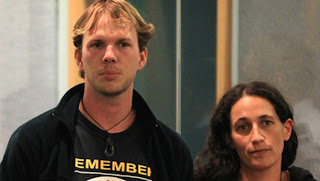 Their firearms convictions could be overturned?
http://www.newstalkzb.co.nz/auckland/news/nbpol/1492319048-gcsb-suspected-of-spying-on-urewera-activist#.UWc2v1iIQds.facebook

Posted by Unknown at 9:09 PM No comments:

Key and Dunne at odds on IRD service...

John key and Peter Dunne are at odds over the IRD tax department's service. But Key's survival depends on Peter Dunne's support. When will Dunne consider his lack of personal credibility and say enough is enough. David Cunliffe knows all about credibility. His went up when he stopped attacking David Shearer's leadership.

Posted by Unknown at 7:33 PM No comments: