NZ is to change the give way road rule - to bring it into line internationally...

The AA says changes to the proposed give way rule will improve road safety and will also help tourists on our roads. 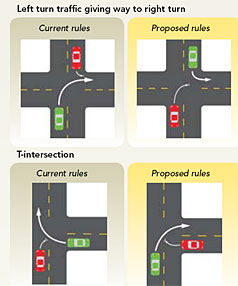 Currently if you're turning left, you have to give way to right turning traffic coming towards you, but this would reverse if the new rules come into force. Public consultation is underway on the proposed changes.

The AA's General Manager of Motoring Affairs Mike Noon says New Zealand is the only country in the world which gives way to the right.

"Quite a portion of intersection accidents are relating to giving way to the right," he told Newstalk ZB. "Make that rule simpler, as this change will do, and it will improve road safety."

He says changes may be needed to the way some intersections are controlled.

"Possibly now we have extra space for holding traffic that wishes to turn left which may not be required for instance, and we may have the requirement to increase the holding areas for traffic turning right."

Mr Noon says the signal timings of controlled intersections will also need to be looked at, with some possibly needing turning arrows. He believes having a rule which is the same as the rest of the world, will also help tourists on our roads.
KR says: It was a previous National Government who changed it in any case. It is a purely political motive that has motivated this change. Though in this case it will be supported.