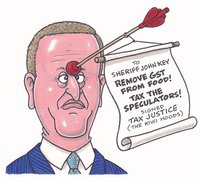 
Fewer than five percent of us feel better off after the budget – that’s the finding from the latest ONE News Colmar Brunton poll, which shows that while spending cuts weren’t popular voters felt they were necessary to help the economy.

In fact just 4% of NZers feel better off. 62% say their circumstances haven't changed and 28% say they are worse off.

Cutting back KiwiSaver was a big part of the Budget spending cuts and that wasn't popular with voters. 42% said they supported the Kiwi Saver changes. 50% opposed them and the remainder were undecided.

Hi Peter,
It seems that politicians everywhere are using the same methods to rule their countries.

You would be right about that , Harry!