David Cunliffe has addressed Key’s truly uninspiring pre-budget speech this morning.
National have no economic plan, and it shows. Key’s tinkering to fix the massive economic gaps, and his only suggestions are a vague warning that National would reduce the member tax credit, and reverse its own earlier move to reduce the default contribution rate.
Yes: they plan to encourage savings by cutting savings.
But the speech was much more about blame-shifting on to the weather, the earthquakes, the GFC and the previous Government. After 2.5 years, we apparently still shouldn’t blame them.
Cunliffe addresses what he politely calls Key’s ‘misleading’ claims:


Rebutting false claims on Labour’s economic record in Key’s pre-Budget speech
1. Key says: “Government spending increased markedly in the mid-2000s”
Fact: Government spending was 31.0% of GDP in 2000 and 31.2% in 2008. Under National, spending as a percentage of GDP has exploded Source: Parliamentary Library
2. Key says: “Government spending rose 50 per cent in just five years”
Fact: Between 2003 and 2008, core Crown spending grew 42.9% but this was before inflation and population growth. In real terms per person terms, spending grew by less than 20%, which was in line with economic growth. This money went into programmes like Kiwisaver, Working for Families, and increased infrastructure spending, which National hasn’t scrapped.
Source: Parliamentary Library

3. Key says: “Since 2004 almost 60 per cent of new jobs have been in heavily government-dominated sectors”
Fact: Key is counting the extra teachers, doctors, and nurses Labour funded as if they are ‘bureaucrats’. Core public servants remained roughly 2% of the workforce under Labour. 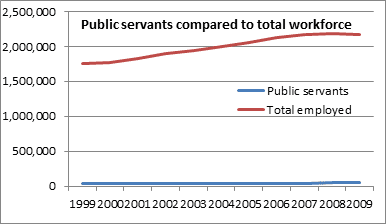 Source: State Services Commission, Human Resource Capability Survey of Public Service Departments; Statistics New Zealand Household Labour Force Survey. Compiled by the Parliamentary Library.
4. Key says: “export volumes grew only one per cent in total between 2004 and 2008”
Fact: Key is using selective dates and the impact of the global recession to mislead. In reality export volumes grew 42.2% in Labour’s first 8 years in office before shrinking 11 per cent during the recession. Under National, export volumes have just now regained the level they were at under Labour four years ago. 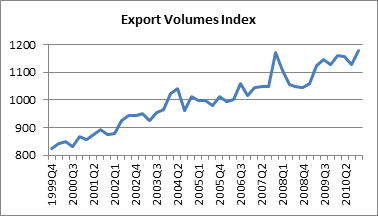 Source: Statistics New Zealand, Infoshare
5. Key says: “since the end of 2004, GDP per person have fallen by an average of 0.1 per cent a year – the weakest period since the late 1980s and early 1990s
Fact: Again, Key is using the recession and his own poor economic record and trying to attribute the blame to Labour. In reality, GDP per person grew 16.8% in the first 8 years under Labour. Since the recession, GDP per person has fallen 5%. National has made no progress on growth, with GDP per capita falling for 6 of its 8 quarters in government so far. Beyond the HuttRiver
Posted by Unknown at 8:07 PM

Hi Peter,
Politicians in your country are similar to those in my country, always make efforts to bring down their enemy.