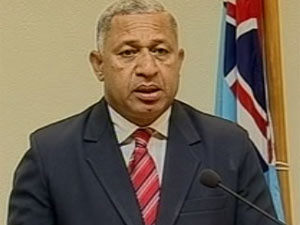 Frank Bainimarama has rejected claims that the 2014 election will not go ahead, dismissing Lieutenant Colonel Tevita Mara as a "little kid who doesn't know what's happening".


Fiji's regime leader Frank Bainimarama has rejected claims that the 2014 election will not go ahead, dismissing the man who made them as a "little kid who doesn't know what's happening".

A former Fiji government insider, Lieutenant Colonel Tevita Mara, fled to Tonga earlier this month while on bail on charges of plotting to overthrow Bainimarama.

Holed up in the capital Nuku'alofa, the former head of the main infantry regiment has thrown a string of accusations of corruption and violence at his former boss.

Lt Col Mara accused the regime of "losing its way" since it took power in a 2006 coup, and said Bainimarama and his attorney-general, Aiyaz Sayed-Khaiyum, had no intention of holding the 2014 election that both Canberra and Wellington have been pushing for.

This was just a "ploy" to soften sanctions and to secure loans, Lt Col Mara said in a statement this week.

Fiji's government has refused to comment to international media on the issue but has told local news website FijiLive that it has every intention of going to the polls.

"I said elections will be held in 2014 so it's going to happen," Bainimarama told the site.

"Don't listen to him, he is not a soothsayer. He is a little kid who doesn't know what is happening around him."

Meanwhile, Tonga is understood to have received an extradition order from Fiji calling for the fugitive's immediate return to Suva to face a charge of sedition along with another senior officer, Lieutenant Colonel Pita Driti.

Lt Col Mara has repeatedly said he would be denied a fair trial as Fiji's judiciary was controlled by the regime, a claim the chief judge has dismissed as "totally untrue".

New Zealand's prime minister John Key this week said he would consider removing the army man from the list of banned officials so he is able to travel to New Zealand.

Bainimarama hit back, telling FijiVillage that New Zealand would further strain its relations with Fiji if it made such an offer.

Dictators are the same all over the world. They would never accept different opinions of other people.

Yes they are, Harry.