Jeckyl and Hide - Rodney and Heather... 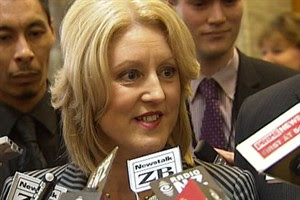 Jeckyl and Hide - Rodney and Heather...


ACT MP Heather Roy has defied her leader Rodney Hide and returned to Parliament against his orders.

She was supposed to be off for two weeks considering her future after losing the deputy leadership, but she has returned early, saying she supports Mr Hide and wants to put the events of last week behind her.

Following her very public demotion, she now also gets to sit behind him in Parliament.

"Eighty-six thousand New Zealanders voted for a list that I was high up on, and I have a duty to come back and do my job," says Ms Roy, "and I'm looking forward to it. I'm back."

But there was no display of unity like last week. She faced the media alone while Mr Hide avoided reporters following an appearance in the House.

That could be because he wasn't expecting her back.

"I've let Heather have a break… We said a couple weeks, but we'll se how we go," said Mr Hide.

Regardless, Ms Roy says she wants to move on from the accusations in a leaked dossier in which she described Mr Hide as a bully.

The memo was leaked by her adviser Simon Ewing-Jarvie who has lost his job.

"I was horrified, mortified and extremely angry at him," says Ms Roy. "There was no way I would condone the leaking of documents under any circumstances and I've told him that."

Returning early is an act of defiance from Ms Roy - the party is more divided than ever.

Mr Hide is now talking to her through the media, just releasing a statement which calls on her to front up to the party's other MPs and board to explain the developments of last week.